During prehistory, the land we know today as Lemme Valley was lapped by sea waters, as the padana plain had not seen its origins yet. To date in the nearby village of Carrosio in fact it not difficult to find fossils of marine origin through simple excavation in the ground, whose geological formations are similar to those found in the Voltaggio area.
It is not unlikely that in the Archaic period the area was already inhabited by shepherds and farmers belonging to Ligurian tribes that were likely to have Celtic ancestry. Years ago, a traveling archaeologist referred to the pile of stones in the shape of a boat found in the homonymous town as the pre-Roman mound of a leader or notable. 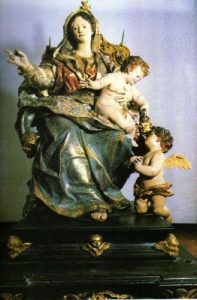 In the upper and middle Val Lemme, no evidence has been found to give certainty about Roman settlements, but we know that the Roman army built the Via Postumia, which started from Genoa, already a well-known maritime centre, passed through the Pian del Reste (near the Passo della Bocchetta), to reach Libarna (Serravalle Scrivia) through the slopes of Monte Porale, finally ending in Aquileia.
Some historians state Voltaggio in the Veliturium or Octavium of the latin world and identify the still existing source of sulfur water with the aqua octaviensis already known in Roman times.
The first certain document mentioning Voltaggio is dated 1007, when John, Bishop of Genoa, in the process of transferring the cathedral from St Siro to St Lawrence, gives the monks from St Siro the enjoyment of a number of assets, including “…decimas …in Gaui. In Carosio. In Uultablo“. The name of the village has been variously modified over time:
“Vultabium” or “Vultacium” (maybe from vaults, goods warehouses, or because “voltato” meaning “changed in its shape”) and also “Ottaggio”, which seems to originate from the Indo-European suffix “tag” (shelter, shack). Unlikely is the connection with its function of customs point of collection of tolls (“u tagio”).
After the year 1000, Voltaggio was especially important for the Republic of Genoa, as it was crossed by Via Postumia (the road of the Passo della Bocchetta, opened in 1585, follows some of its sections), that overcame the Apennine Gioghi (long and round mountain peaks) avoiding the Imperial Feuds. This route, owned by Genoa, therefore crossed Fiaccone (today called Fraconalto), Voltaggio, Gavi, finally arriving at Novi.
In 1121, the Genoese acquired from the Marquis of Gavi the territory of Voltaggio and its castle, located on the top of the hill overlooking the confluence of the Rio Morsone, the Rio Carbonasca and the Lemme river. According to Caffaro, Genoese annalist contemporary with the events, the consuls of Genoa bought the castles for 400 lire, but it is possible that his report was a sweetened version of the facts and that Voltaggio was conquered militarily.
Up to the XVI century, Voltaggio was ruled by the “Castellani” first and then by the “Podestà”, side by side with the “Consoli”. The first two were appointed by Genova, exercised justice and were responsible for the defense of the village; the “consoli” (the first of whom was Guglielmo De Volta), on the contrary, were chosen among the most eminent people in the village and were in charge of taking local decisions with the support of the assembly of heads of family, who met in the parish church.
In 1396, Genoa was transferred to France and as a consequence Voltaggio too, but the government system was kept the same. After the fall of the French Government, there were ten years of uncertainty that ended with the transfer of some territories, including Voltaggio, to Pope Martin V. In 1421 the Milanese conquered Genoa, that became part of the Visconteo Duchy with its territory.
Due to its strategic location along the only mean of communication between the hinterland and Genoa, Voltaggio was often disputed. On 9th April 1625 it was burned down by the French, who were allies of the Savoy of Carlo Emanuele I against the Republic of Genoa. It was then that both the parish and the council archives were destroyed, together with some buildings in the main street.
More distruction events happened in 1747, when Austrians and French-Spanish fought for the Bocchetta route to Genoa.
Its border position caused it to follow the fate of its many occupiers. In 1798 it was included in the territory of the Ligurian Republic and then was transferred to the Napoleonic Empire (1805) and then to the Kingdom of Sardinia (1815). In 1831 it was aggregated to the ephemeral province of Novi and when the Minister Urbano Rattazzi instituted the Province of Alessandria (1859), it was incorporated into the new administrative situation. On 15 th October 1816, following the annexation to the Kingdom of Sardinia, it is historically established that the Reali Carabinieri arrived in Voltaggio settling in the former barracks of the Gendarmerie, setting up the station that has been safeguarding the area for over two hundred years.

As evidence of the links with Liguria, the station depended from the Lieutenancy of Campomorone, that was part of the Duchy of Genoa.
Other evidence, still in force, are the parish of Voltaggio belonging to the Genoese Diocesis (since 1255) and the dialling code is 010, the same that it is for Genoa.
Over the centuries, Voltaggio was the birthplace of some famous people, such as San Giovanni Battista de’ Rossi (Patron Saint of the village), Blessed Maria Repetto and the Servant of God Don Nicolò Olivieri, who all testify to the religiosity of the population (their birth homes, all along today’s Via De Rossi, are marked by clearly visible marble plates).
Important artistic figures were Sinibaldo Scorza, who was among other things court painter of the Savoy (one of his work is still kept today in the Capuchin Friars Art Gallery – that can be visited – together with many other prestigious works from the XIV and XV centuries) and his contemporary painters and cartographers Giovanni Battista e Bernardo Carrosio.
Despite the inclusion in the Province of Alessandria, the bond that links Genoa and Voltaggio is still strong, because the local idiom belongs to the group of Ligurian dialects, because of the massive migration to the major city centre by the population and because of the success of people from Voltaggio in tens of business and commercial activities in the Ligurian main town. This membership was officially recognised in Genoa on 10th September 2005 by the issuing of the title of Honorary Municipality of the Province of Genoa to Voltaggio.